When and how to ask a question for maximum visibility

Not sure if this question itself is not appropriate for Meta, but I notice that not all times are equal. Any user experience on when a question "flies" or is not noticed at all.

My experience has been that around mid day UTC on weekdays is the best and making the title sound as if the question is extremely simple are two ways to get those crucial "initial votes" which then take the question to higher levels, I think it may be worth discussing this to ensure that the community can use this information

I've thrown together a small Data Explorer query to answer your question (click image to enlarge): 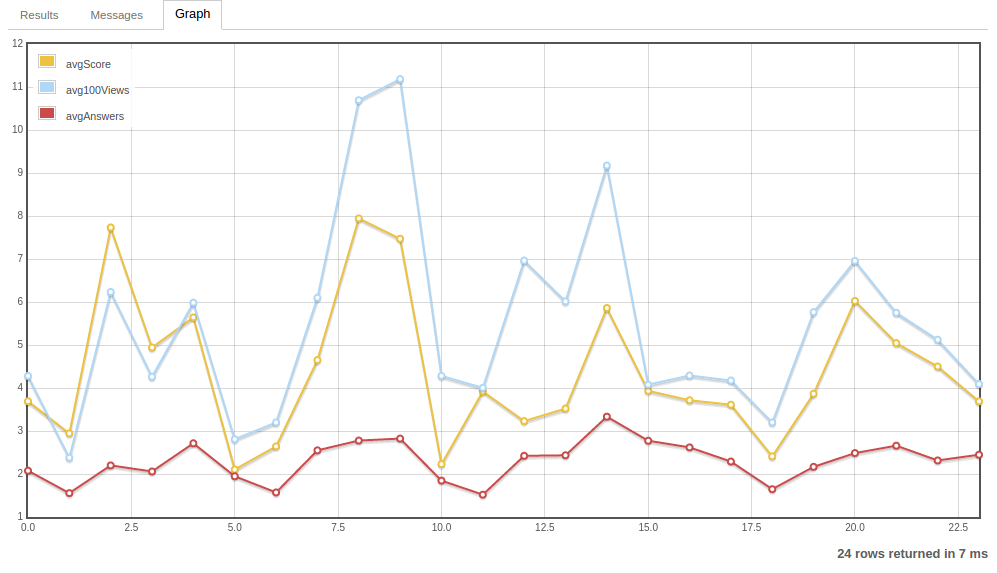 Apparently the answer is "about 9:00 UTC" for the maximum amount of votes, views, and answers, but there are several other peaks at various times.

Really, the site is so small right now that the difference will be mostly negligible. I'm fairly certain that the fluctuations in the graph are mostly due to randomness, and not really due to the time of day at which questions were asked.

Out of curiosity, here's the same graph for Stack Overflow. As you can see, the lines are much less... wildly fluctuating than ours are (in fact, they're almost perfectly straight).

4
Can and should we "sandbox" new challenge posts?
10
Challenge questions and post quality: How should we proceed?
3
Why do people favorite a question, but not upvote it?
3
Does this question seem appropriate for PSE?
3
Should [reverse-puzzling] be a synonym of [puzzle-identification]?
2
Definition of [probability]
23
Do "prefix-suffix-infix" riddles deserve their own tag?
3
Answering an already answered question
36
Please can "How to get to an island with a tree in the middle if all you have is rope" be undeleted and historically locked?