A rise in low-quality questions (March 2015)

I'm concerned by what seems to be a rise in low-quality puzzles posted in the last month or so.

Here's a graph of the percent of questions whose net score is negative or 0, by week, since Puzzling went public in May 2014: 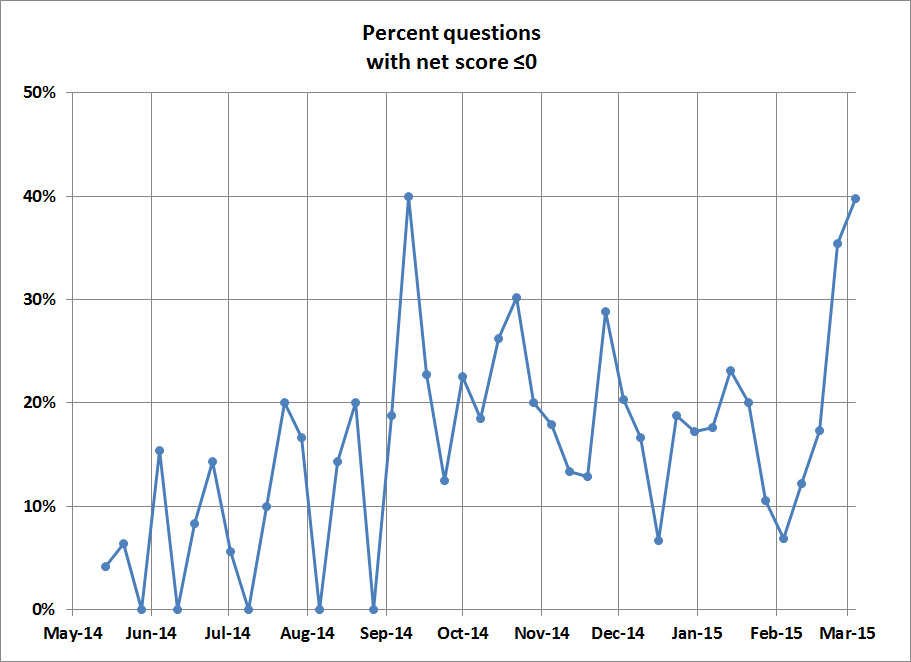 (Thanks to Emrakul and Gilles for the data.)

Note the upward spike all the way on the right side, representing roughly the last month. Recently, more than 1/3 of questions have scores ≤0. That's the highest it's been except for a week in Sep 2014, and it comes after a period of relative quality.

This could also be a fluctuation on the historical scale, or reflect a change in voting. But I had myself gotten the impression of way more poor puzzles being posted than before. And I do think the downvoting is helping; it's the underlying problem that concerns me, not the symptom of downvotes.

What is the reason for all these low-voted posts? What can we do about it?

What I think we're looking at is a tendency toward a desire for higher originality. Take a look at rebus puzzles sorted by age, then scroll to the bottom of the page. As you scroll up, watch the scores, and you'll see what I mean. Initially, they scored highly, then slid down quickly.

Let me ask this question: how many triangles are in this pentagram shape?

If this were the first puzzle of its kind that you'd ever seen, then I imagine you'd probably upvote it: It's interesting the first time. The second time? How many triangles are in this figure?

By now, you're bored. Even if it's the first time you've ever seen a puzzle like this, you're still probably thinking "another one? Really?" Thinking back on the first puzzle, the votes are now inconsistent. Why upvote one and not the other?

People begin holding puzzles to higher standards of originality. We seem to have a bias toward new types of puzzles, even when these new shiny puzzles aren't all that high quality in the context of others.

In the long run, it's probably alright to let this bias run its course. For each type of puzzle we see, we'll come to expect originality and high quality. I think our standards for these puzzles will converge and be consistent long-term.

As a case in point, I'm going to take rebus puzzles as an example, as linked above. Many of the first rebus puzzles posted were upvoted a ton. Theeeeen after about seven days, we hit a stack of negatively-scored posts. Why? If I had to guess, I'd say people got sick of dumping rebus puzzles. When it comes down to it, a lot of them are really mostly the same.

I'm confident, though, that if someone were to post an intricate rebus puzzle, or one which contained some unusual or nonstandard variation, it would receive upvotes.

Do we need to do anything about this bias? I'm not sure. Let's split it up by new users and regular users:

I'm not sure this covers everything, but it's a place to start, and I think this is the pattern we're seeing.

On the whole Emrakul's excellent answer sums up the situation nicely, but I have enough extra points to make that they won't all fit in comments.

Firstly, let's not assume that all multi-downvoted puzzles are necessarily bad. People downvote for all sorts of reasons, many of them subjective. As Emrakul said, regular users have now seen a lot of rebus puzzles and started getting bored of them. Maybe some people downvote every new rebus puzzle just because it's a rebus puzzle - this is bad. We should objectively examine each new puzzle and judge it on its merits, not on whether it's similar to lots of other puzzles we've seen. What if a real gem comes up as the 20th rebus posted in a day? Would it get upvotes or downvotes?

Here's what I'd recommend: if you see a stock, boring puzzle, and it's coming from a new user, leave a comment. Give 'em a welcome, and let them know that we see a lot of these types of puzzles, but if they have other new or interesting content they'd like to post that they should feel free to.

I agree with this, but I think the tone of such a comment should be carefully crafted. A lot of people come to SE, post one or two questions, get a negative response, and then leave. Users who've been around for a long time can be trigger-happy with the downvote button and forget how it feels to be a new user hoping for approval. That's why I've never quite liked remarks along the lines of "Puzzling is going really well: we're getting lots of downvotes now!" Of course some questions really are cr*p and should be downvoted or even closed, but we should be careful not to go too far. Some of our top users started off posting bad questions (often as near-copies of existing questions) and then stayed, learned from their mistakes, and ended up with a very high-quality output. Here's my suggestion for a comment of the type Emrakul mentions:

Welcome to Puzzling SE, and thanks for your [type X] puzzle! Don't be too discouraged if you get downvoted; there have been a lot of [type X] puzzles lately and people are getting bored of them. Please feel free to contribute more puzzles to the site; non-[type X] puzzles will probably have a better reception.

I agree with your perspective. Without an analysis of the low-voted posts, I am guessing that two significant issues were a) questions from new users and b) Rebus puzzles.

It seems that types of puzzles go in cycles. Before February, there had only been 4 Rebus puzzles. During February, there were 40 and almost half received zero votes or less. It seems like it is easy to post a poor quality Rebus and difficult to make a good one.

Regarding new users, I think that it is not easy for them to understand what is a good question unless they spend time going through past questions and meta discussion. In my opinion, the most significant need on puzzling.se is the development of concise guidelines about what is good and what is not. I do understand that this would take a significant effort by several dedicated people as well as some time to build consensus.

Not the answer you're looking for? Browse other questions tagged discussion question-quality .

10
Challenge questions and post quality: How should we proceed?
7
Proper review policy for Low Quality Posts
15
Open-ended questions inspire a vast number of low-effort answers
18
How not to be a spammer (redux)
3
Should we historically lock highly upvoted but low quality and off-topic questions?
9
Recent influx of low effort riddles?
12
Revisiting the 'math question or math puzzle' policy
13
Should we implement an automated way of highlighting quality content?
6
What is a Puzzle Tag™?
6
Updated the warning messages about quality standards of questions on PSE