Why do people favorite a question, but not upvote it?

This Question has a bunch of 'stars' (favorite question) but does not have the same or a higher amount of upvotes. That doesn't make any sense to me, because a star has a higher value (even though it doesn't give any reputation) than an upvote IMO. I've not been around here for a long time, but I've never seen a SE question that has more stars than upvotes except when:

Both cases do not match to this question (IMO). So I just want to know why people don't give the person who created the puzzle they enjoyed extra reputation and making it a 'hot' question, instead of just favoriting it. A upvotes/stars balance (see picture below) of 2/5 (= 40%) respectively without my vote and star 1/4 (= 25%) is pretty strange, I think. 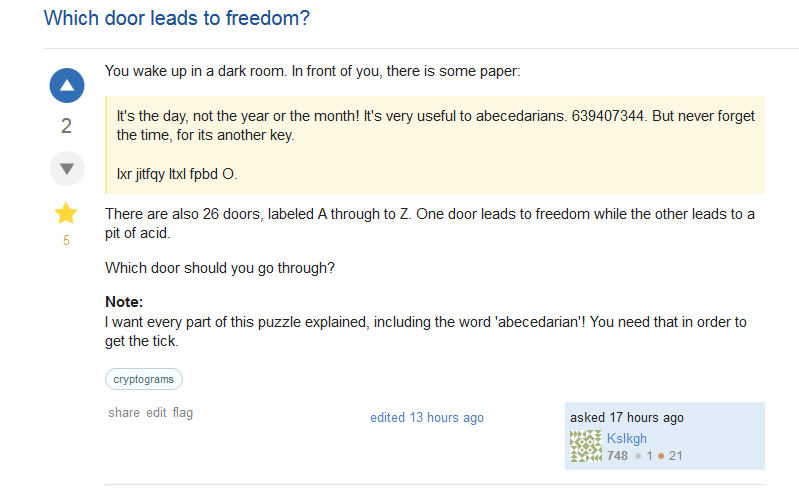 Well, there could be several reasons for this:

Essentially, "favorite" == "bookmark" and not "this question is good." In fact, some users use favorites in their own weird, personal way (the last three examples were a stretch, but I've seen some users who use favorites for some pretty weird purposes).

Favorites have nothing to do with a question's worth, and are simply there so that users can come back to the question later (sometimes I'll even use them to remember to come back and vote to delete a question on Stack Overflow).

20
The Ability to Change Vote?

14
Getting to business: How can Puzzling make the internet better?
18
Giving puzzle questions the recognition they deserve
13
Why did people find my question offensive or questionably offensive?
58
Can we get +10 reputation for upvotes on questions?
31
What is our reason for wanting bounties on questions?
10
Should we upvote good answers for puzzles we've downvoted for being not good?
41
Should we ask our new moderators to step back and take a more hands-off approach?
21
The end of open-ended puzzles
46
Congratulations Gareth! and the end of an era