@rand al'thor used to be one of the leading users on this site. It seems he has been suspended (why exactly, I don't know) quite some time ago.

He claims on his profile that he has 26,429 rep on Puzzling SE, which is obviously not possible. So my question is, are we allowed to post false/misleading content on our profiles?

Are we allowed to lie in our profiles?

Yes. There is no rule that requires honesty. There are people say they are located in a fictional place, for instance. And our beloved Shog9, who is always looking over our shoulders (in the nicest way possible, and of course, we're all happy to have him there), says in his profile that he's "Not looking over your shoulder".

Generally speaking, your profile is (to an extent) fair game, as it is a reflection of you as a person, not the site as a whole.

Self-promotion, your e-mail address, humor, (if you know HTML) imagery and even the f-bomb are allowed there.

There are reasonable limitations for all of those, but generally speaking, unless you're a hard-core spammer or you put something truly offensive / crazy in there (like hate speech or pornography), you'll be OK.

Also, understand that all links are no-followed, so SO doesn't actually give you Google Juice from your profile.

The user page is a reflection of that user and it is their page to do with what they will.

(Within reason, of course.)

We also allow explicit self-promotion on the user page, which is not allowed in posts, either. 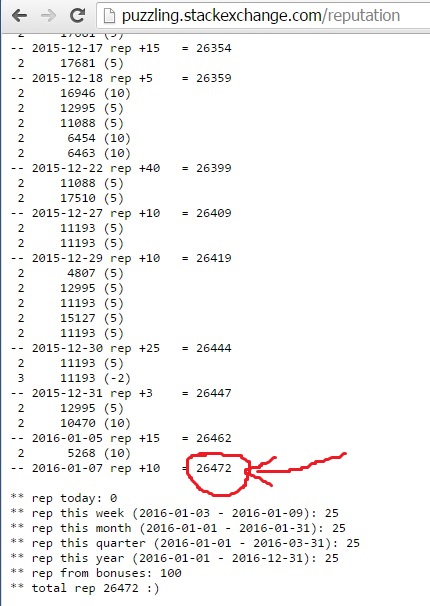 I'm not willing to go through his profile's "reputation" tab and add up the gains for each day over the past 13 months, but if you were inclined to do so, you would certainly see that the sum total is in the ballpark of 26,500. Rand is imperfect, like all of us, and he has his faults, as all of us do, but I am confident in saying that dishonesty is NOT among those faults.

On the merits of the way this question and the way it was written:

On a side note, if I were you, I'd retract my assertion that Rand's rep count is "obviously not possible", and its implication that he is lying. Not only is his rep count possible, it is a fact.

As I see it, this portion of your question is a clear violation of the cardinal rule of Stack Exchange: Be Nice

Rudeness and belittling language are not okay. Your tone should match the way you'd talk in person with someone you respect and whom you want to respect you. If you don't have time to say something politely, just leave it for someone who does.

Don't be a jerk. These are just a few examples. If you see them, flag them:

It would have been easy for you to ask about dishonesty in profiles without putting another user on the hot seat and implying that said user is dishonest. That hypothetical version of your question would have been valid, and I wouldn't have taken issue with it. But when you call a specific user's personality and integrity into question, you cease to "Be Nice", and the validity of your query gets lost amid the accusations and ad hominem attacks.

When rand al'thor was suspended, his reputation was set to 1 for the duration of his suspension. Before his suspension he did in fact have a very high reputation (I don't know exactly what it was, but 26,429 seems reasonable).

When his suspension has been served, his reputation will be restored to its former value.

This doesn't actually answer the question posed in the title, but I think it's what you're looking for.

To answer the question, I think the profile is the one place where almost anything goes (aside from offensive, hateful, or libelous content), so I don't think there is anything preventing someone from claiming they have 1,000,000 reputation if they so choose.

Not the answer you're looking for? Browse other questions tagged discussion profile-page .

3
Why does randalthor only have 1 rep?

7
Are mazes allowed?
19
Are puzzles and riddles welcome?
2
Are we allowed to post 'Link Puzzles'?
1
How do we move past the absence of our top contributor?
10
Are misleading hints allowed?
40
Should we ask our new moderators to step back and take a more hands-off approach?
1
Are "Quizzes" allowed?
9
Are emojis, fonts, etc. allowed in post titles here on PSE?
9
Is "I got this puzzle from a friend", "I just have the image", etc. sufficient attribution for a puzzle?