What should we do with posts containing materials unsuitable for young children?

I think this is a case where "policy" isn't the right way of thinking about it. The quote from the help center Mithrandir cites is—I'm guessing intentionally—vague:

Inappropriate language or attention. Avoid vulgar terms and anything sexually suggestive. Also, this is not a dating site.

There's no list of terms that are vulgar included, and depending on your disposition a variety of things can be considered sexually suggestive. 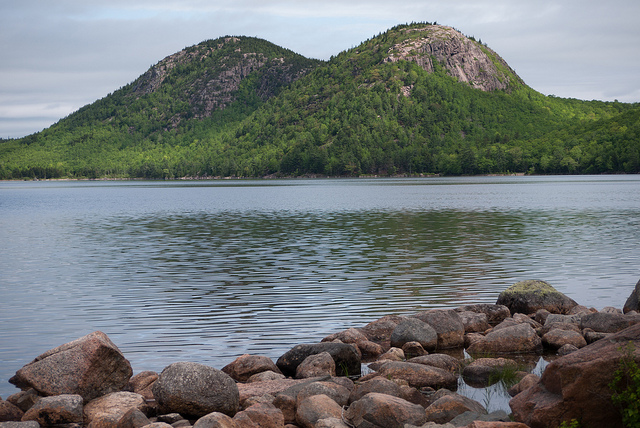 The Bubble Mountains at Jordan Pond in Acadia National Park. One of my favorite places. Have a popover and pick some blueberries while enjoying the view.

Instead of policy, this is something we should just address with good sense as a community on a case-by-case basis. For example, if a puzzle contained the following, I would advocate for keeping it.

Name two parts of the body that are anagrams of one another.

That's totally legitimate in my book. But if something is there to deliberately provoke/offend, or is in poor taste, let's remove it. In short, it's not just the word or the idea of sex, we should consider the context and whether it's something of value. (Like I don't think these are really good material for the site.)

As for the specific answer in question, it seems to me like it was more an effort to make a crude joke than truly an attempt to solve the puzzle, so I would be fine if it disappeared. But that's up to all of us to vote/flag/etc!

N.B. that personally I come down on the very liberal and hard-to-offend side of things, but at the same time understand that it's the community's taste that's paramount.

Remove it. From the Be Nice policy in the Help Center:

Inappropriate language or attention. Avoid vulgar terms and anything sexually suggestive. Also, this is not a dating site.

It should be deleted, it adds no explanation as mentioned by our moderator Emrakul in the comments.

But again, if the answer explains it, then it would get more inappropriate for younger audiences.

What should we do with posts containing materials unsuitable for young children?

We do have lots of teenagers who visit the site :)
The posts with such intentional explicit innuendos should be flagged and should be deleted.

Not the answer you're looking for? Browse other questions tagged discussion policy .

8
What to keep in mind while answering puzzle?

41
A policy on plagiarism
7
Proper review policy for Low Quality Posts
12
Revisiting the 'math question or math puzzle' policy
13
Should we implement an automated way of highlighting quality content?
7
What's the policy on puzzles *paraphrased* from other sites?
2
Can i ask if an answer to a puzzle is right?
8
Do we want to [find-the-tag]?