What happened to the 'How to become the president?' question?

It's been over a year, but there was a simple but otherwise interesting puzzle (especially for newbies) called 'How to become the president' or something on the site.

I don't remember the exact options, but it was similar to what's given above. The solution was to figure out which option could be correct (and all the others incorrect) without causing a contradiction.

The question was well upvoted at the time. It was on-topic and was posted by some high rep user (maybe Gamow or rand al'thor or someone but I'm not sure) so I don't think it's likely the user got deleted. As far as I know, such a question would still be on-topic.

It got deleted last september, I believe for plagiarism with a few others of Gamow's. 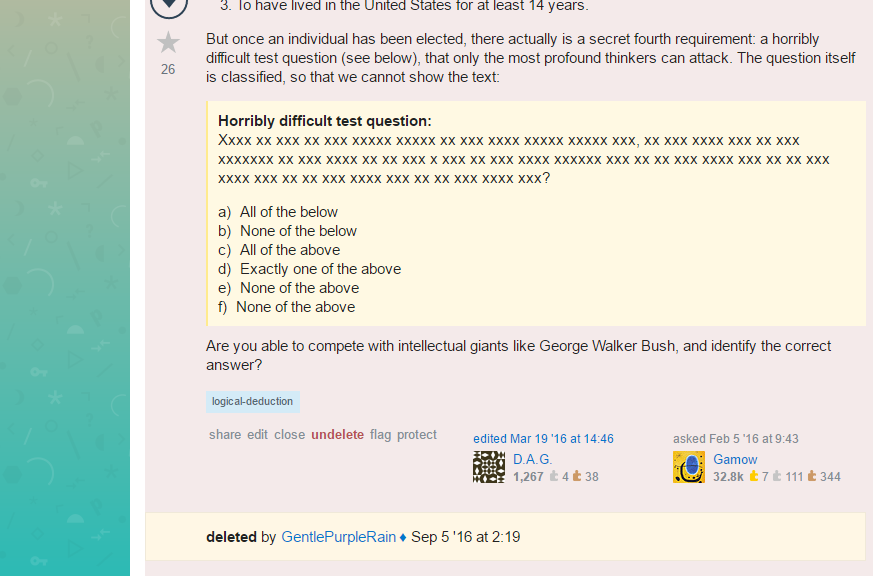 Not the answer you're looking for? Browse other questions tagged discussion specific-question deleted-questions .

12
Lateral-thinking requires a new policy
9
Handling puzzles with multiple steps and the posting of partial answers
4
Community consensus on linked puzzles?
18
How not to be a spammer (redux)
10
Is it OK to make a puzzle which requires distinguishing fairly similar colours from each other?
7
Definition of retrograde-analysis
8
What tricky mathematical questions are on topic here?
8
What can I do in this pressuring situation?