Is there/ should there be an instruction / tutorial to use code to hide answer?

A great respect to puzzling SE that most users the command >! to hide their answer (and show up the answer only the visitor hover the mouse on screen), so that the visitors can apply their effort and doesn't get influenced.

Recently I've met this question; none of the answers used this technique; as a result they're hindering independence of thought.

So; could this feature be reminded with a pop-up message and the right-side yellow box (Only for this community (puzzling))? 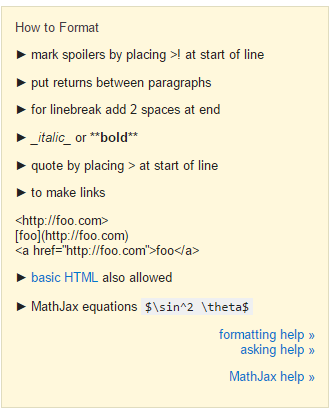 Though the page describing it, is linked to the yellow box; still the new users/ unexpert users may become less-prone to use this feature.

It depends what sort of puzzle it is.

More open ended ones don't really require spoilers, as its more a discussion, whereas puzzles with definite answers/steps should have spoilers. This is why some questions have answers with no spoilers, they don't spoil anything.

I don't think we really need that (furthermore, I don't know if we can change it) so it should be left as it is.

Not the answer you're looking for? Browse other questions tagged .

25
Empuzzler: A user script for hiding comments and answers until you want to see them
12
Lateral-thinking requires a new policy
5
Polls about Puzzling
15
Please vote on a new title prompt for questions
7
Should we hide tags, or allow hidden tags?
0
Code Wrapping, Hide/Collapse Unhide/Expand Function
7
How about a private sandbox?