What should we call "grid logic" challenges?

Currently, it looks like our next fortnightly topic challenge is going to be about puzzles that I have tentatively called "grid logic" puzzles. A more precise definition would be "abstract puzzles on a grid using a pure logical deduction to arrive at an answer. The answer is a modified version of the original grid satisfying specific properties given by the rules of that specific instance that relate to relative placement of 'objects' (typically either numbers, bars, geometric shapes, or shading squares)."

However, the hypothetical tag grid-logic is extremely similar to the current tag logic-grid, which refers to puzzles with clues like "The Belgian man lives to the left of the person who owns a fish".

So, what tag name should we use for these puzzles? They all share the idea of "logical deductions, usually on a grid", but there are very distinct examples: 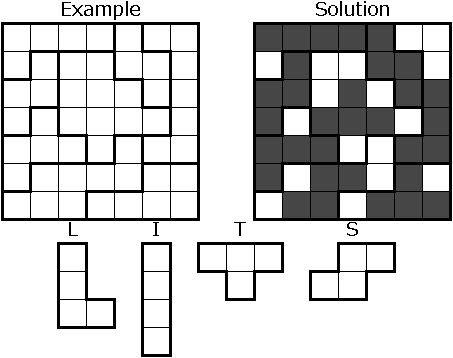 What concise phrasing could we use to describe all of these?

All example puzzles here were made by Mathgrant, a writer for GMPuzzles. For more puzzles in this genre, I recommend GMPuzzles, Nikoli, and Krazydad.

As with Rubio's suggestion, we leave out the word logic to avoid confusion with 'logic-grids'.
I feel like this is a bit more descriptive, as what are we doing in these puzzles but deducing the state of a grid? I tried thinking about what these had in common, and really, they are puzzles where we deduce the state of a grid.

Not the answer you're looking for? Browse other questions tagged discussion tags .

59
What should the subjects of our fortnightly topic challenges be? (with updates!)

4
Which puzzles with chess board must be on-topic here?
12
Lateral-thinking requires a new policy
5
Should [hat-problem] be its own tag, instead of a synonym?
8
Tag for prisoner puzzles?
17
It's tag cleanup time! Complain about tags for free meta points!
3
Should [reverse-puzzling] be a synonym of [puzzle-identification]?
5
When tags are subsets of other tags
14
Fortnightly Topic Challenge #36: Twisted Classics 1